What do we know about Project NOVA so far? The presentation of Game Director CCP Rattati on the stage of EVE Vegas has given some interesting insight about what the game will be about and what we can expect from the PC-exclusive FPS.

DISCLAIMER: The game is still in development and as such natural suspect to change.

If you have a bit of understanding how video games come to live, you know that means it’s way to early to judge and make great assumptions. Don’t be that guy in the Youtube-comments that thinks he knows everything after a ten minute video of alpha gameplay and a single game mode.
The following shall give an overview over the different elements that are part of the sum that will make Project NOVA in the end. You will see that we just can’t know yet if this game will be worth our while, hence we have only seen a fracture of it. 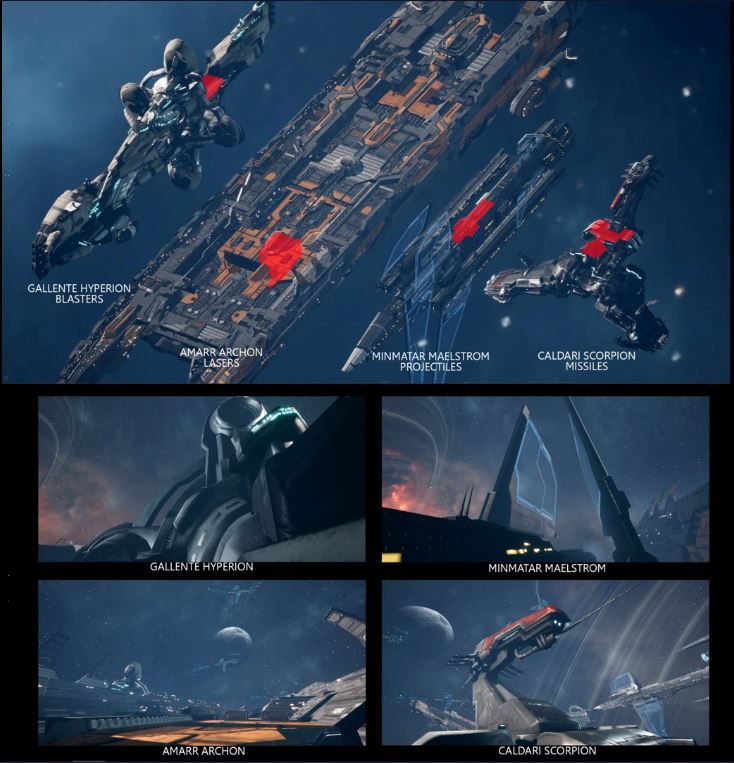 Project NOVA takes nothing less than the EVE Online universe as inspiration. The map playable in a PRE-Alpha iteration was set directly on the back of a Maelstrom class Minmatar battleship. Players had to capture control points to charge the emergency warp drive of the vessel which was being attacked by Sansha’s NPC Soldiers  – The bad guys that rule the Stain region in New Eden, some of the Amarrian Low Sec and the initiates of Incursions. If you want to know more, here is the official lore.

The action will take place on the exteriors of EVE Online’s mighty spaceships and structures with all new content, delivering a much darker and terrifying experience than ever seen before in New Eden.

Quote from the first NOVA Newsletter.

This means we probably get to see a very pretty and a likely evolving scene in the skybox. Tough the first teaser trailer looks promising, we hopefully won’t have much time to stay and stare.

It’s not a CCP thing.

There will be no story campaign. At least there is none planned yet. It seems like the story is more or less told by the items in the game and the rich source of possible factions that provide them. Each of the factions has their own background, history, philosophy, goals and ways to chase them. They have been told over fifteen years in EVE lore already. You only have to read – or let read them. I would like to greatly recommend The Eve Reader Podcast at this point.

So far we only have seen the PvE mode “Hijack” which sends players versus Sansha’s NPC troops to fight over control points on the map. The special thing about this mode is that the AI will try to adapt within a certain set of rules to situational context like player behavior. You can read more about how this works in this interview with Lead Designer Paul Wright on Biomassed.net. 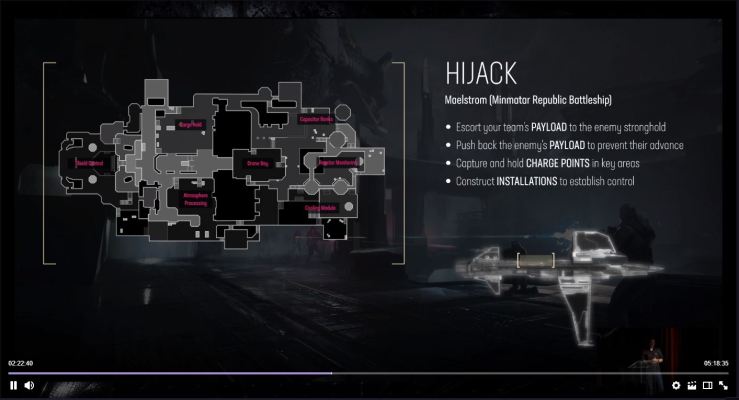 You have to rely on your footwork when moving around. There won’t be vehicles nor are there any planned at launch. Movement will at least partly depend on the class of dropsuit you choose. There will be slides, hoovering and getting stationary to gain accuracy and rate of fire, so you can “snipe” with a shotgun.

You will get standard weapons from the good guys at the Upwell Consortium and progress from there. There will be weapon attachments to customize your gun and of course lasers for the Amarr. Bullets of weapons utilizing kinetic damage might be able to pass through targets and hit things behind it. 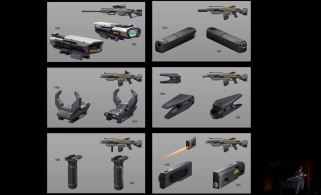 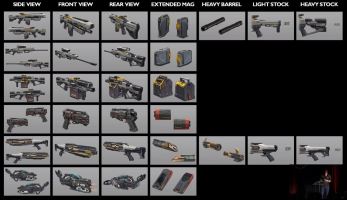 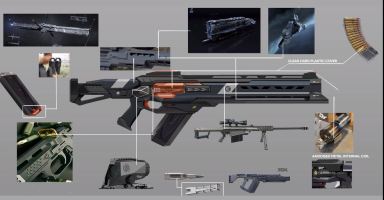 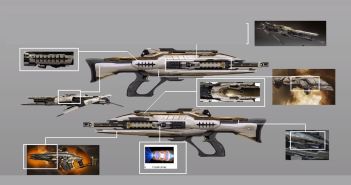 Installations are “time based augmentations” players can use to gain boons for a certain amount of time or setup defensive systems of strategic objectives on the map. They shall provide some kind of Rock-Paper-Scissors mainly against AI-opponents which will come in different flavors. 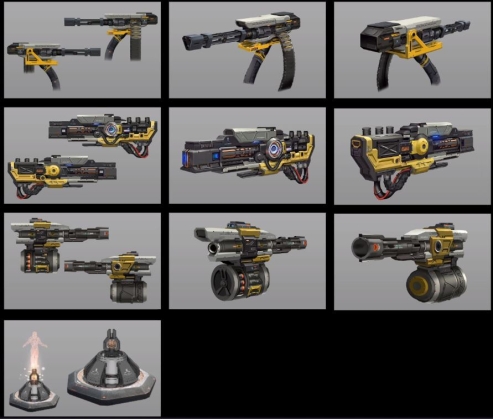 Every dropsuit will give you different perks/bonuses & abilities you can customize to a certain point. These bonuses can be changed through “Firmwire”.
Apart from Firmwire you have modules you can equip. The modules can be active and passive. The passive ones will provide a lower boost that is active all the time or active modules, that need to be activated with and give a stronger boost over time. Active modules will have cooldowns. There will be no charges of the abilities like in Dust 514. 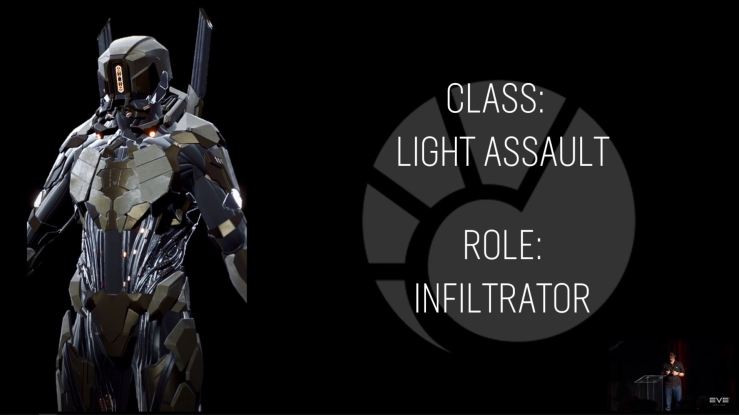 Firmware is a special slot on your dropsuit that will provide bonuses but also will have  negative effects. CCP Rattati expects that a meta could develop around these slots. If you want to change the Firmware on your dropsuite, you will have to destroy it. Like a rig in EVE Online.

Confirmed suites so far are from Mordus Legion for Assault, Minmatar as a Light Assault-class, Caldari as a Heavy Support. Planned are a and Gallente Heavy and a Sisters of Eve version as a “logistics” suit. 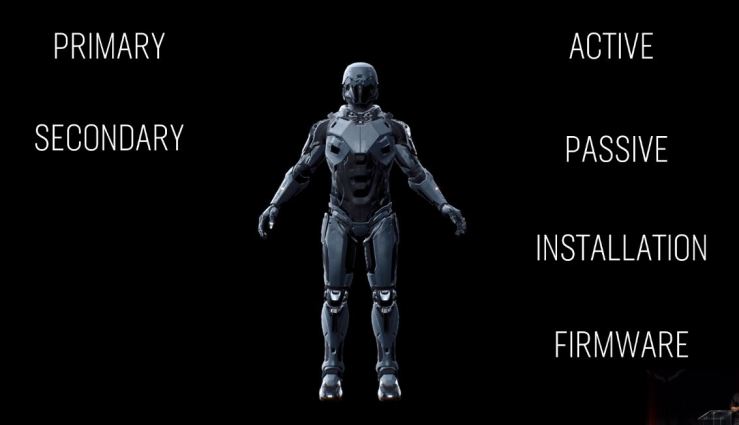 While playing you will earn new loadouts which will work out of the box. When you find a loadout you like, you can start to customize these loadouts with your favorite guns and modules which you unlock over a so called loyalty point system.

You will only unlock new stuff for a certain dropsuite by using it. There will be no passive skill training comparable to EVE Online.

After that you can upgrade the power grid of your favorite suite to gain access to better modules.

This system overall shall have theory-crafting aspects like ship fitting does in EVE Online.

A per-death penalty won’t be there. You also won’t loose your dropsuit when you die. Instead, there will be consumables per battle. In Dust 514 you could die before making effective use of let’s say – a gun – you only have one of, in NOVA you will have the item you activated during the whole match, no matter how often you die in the process.

This was mentioned during CCP Rattatis presentation as highly hypothetical. Not even a soon™ on anything here. But there are thoughts to let NOVA have influence of Eve. The example named where structure timers. An Eve corporation could sign a contract to NOVA players to attack a hostile citadel for them to move the structures timer by +/- 1 hour. If the attacking NOVA players succeed the vulnerability timer will be changed. Of course the owner of the structure would be notified by this event and could deploy their own NOVA unit to defend this, or hire other people to do it – IN THEORY.
Apropos corporations – there are no corporations planned to be in NOVA, at least not at launch.

According to CCP Rattati, the wish to combine NOVA and EVE in a meaningful way was a major reason for moving the development team of NOVA from Shanghai to Reykjavik.

Will feature a public road map (maybe like updates.eveonline.com) and a promised implementation of requests from the player base. It was not mentioned what form this implementations will be. It might be weapons, guns, firmware… skins?

Speaking of communication: You can sign up for the official newsletter here. We only had newsletter since Fanfest in spring 2018, so don’t worry about spam – yet. Singing up there also gives you the chance to get invited to play during different testing-stages of the game. So keep an eye out for that.
If you have missed or lost the first mail you can also find it kindly provided by the authors of Biomassed.net.

If you want to know even more, I highly recommend this great video series made by Dust 514 veteran Pokey Dravon:

Video 8 is a FAQ and 9 shows a few minutes of PRE-Alpha gameplay.

If you have played Dust 514 on Playstation you can claim the name you used there plus some special looking ‘PHOENIX’ dropsuit. If you had connected an e-mail to your Dust 514 account, check it and you might find a message from CCP there.