It shows stacked transparent papers, painted on with black ink. Through the stacking of the sheets a misty look is achieved. It reminds of landscape photographs shot in autumn.

I think this looks super cool and the simplicity did stuck. My brain began to think how to recreate this in digital form. It took a few days until thoughts began to take shape. Since this is an EVE-blog I went over to the amazing EVE_NT Designer. With this tool you can load most of EVE Online’s ship and station models in your browser in front of your preferred background. You can choose different Nebulae from different regions or a color you like. Adjust lighting and camera angels, add guns, even fire-effects are possible. When you are happy with your result, you can export it.

TIPP: Exporting images with the EVE_NT Designer works best with Firefox. With Chrome you sometimes get very long loading times.

For this project – which naturally had to be black and white – I started off with the model of a Caldari station as a base layer in front of a planet/moon. To be frank, that’s just a grey ellipse, but does the job.

Then added a Providence Freighter, gave it two Arbitrators and a little Dragoon as escort and let them approach the station. They make the second layer.

All the “(Rechteck)” you see below the different elements are the “jet trails” which have to be done manually. Every layer has it’s own FX-effect that adds an appropriate diffuser.

After this second layer I added an Atron, and some Catalysts in the foreground, closing in on the scene. I wonder what they might have in mind?

You might have noticed that with every layer the scene got a bit darker, which was achieved with a semi-transparent black layer in every group. 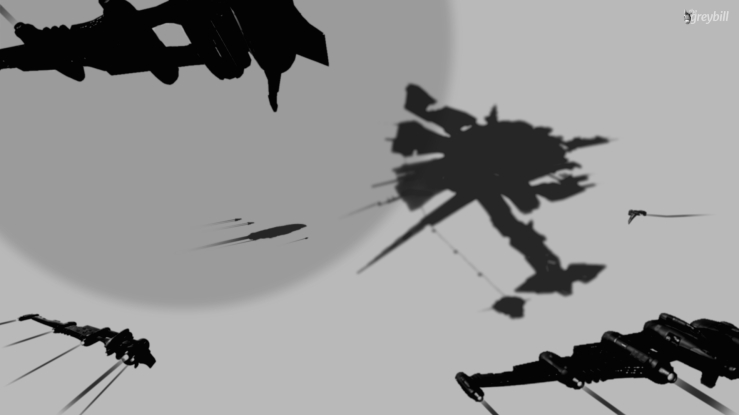 If you have ideas for scenes to recreate, I would be glad if you let me know in the comments.

P.S.: Yes, I do and have done occasional art for ISK.